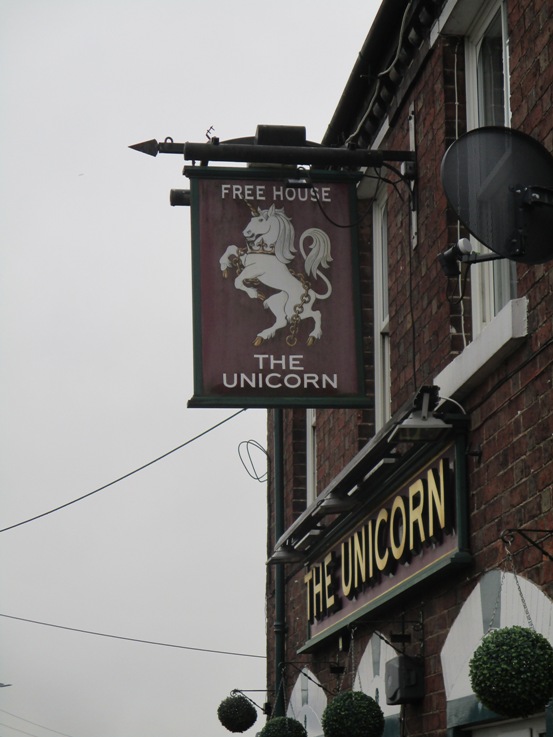 A slightly reduced pack gathered at The Unicorn in Little Dawley in damp *dreich conditions. 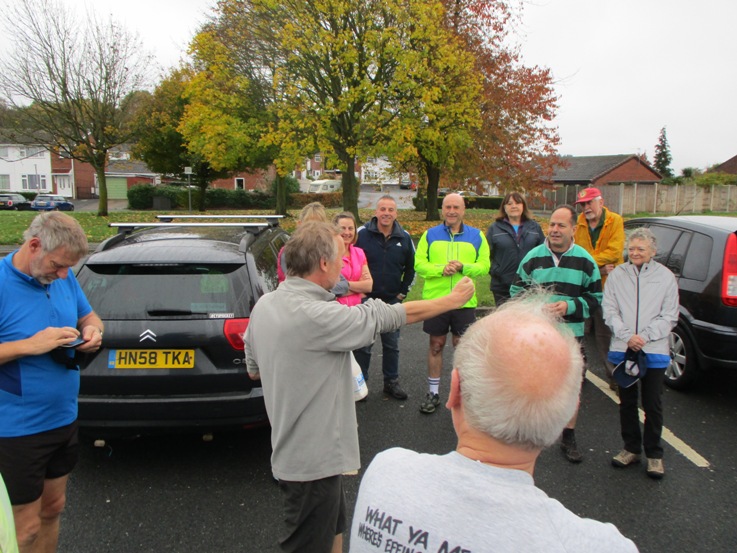 It did not look good as we drove out toward Wellington, especially as the top of the Wrekin was blanketed in low cloud. The weather must have come as a slight shock to at least one Harriette returning from her holiday in Florida and, –  nice to see Sarah and Milo making a late appearance on trail,  the dog being our solitary canine Hash Hound today.

Hare notes today were brief, trail laid in flour OnOn – that way! The trail was well marked and lengthy, thanks Simon your trail laying is improving. Not many false trails but there was much use made of the fishing pools and dis-used railway lines which criss-crossed the area around Telford Town Park. 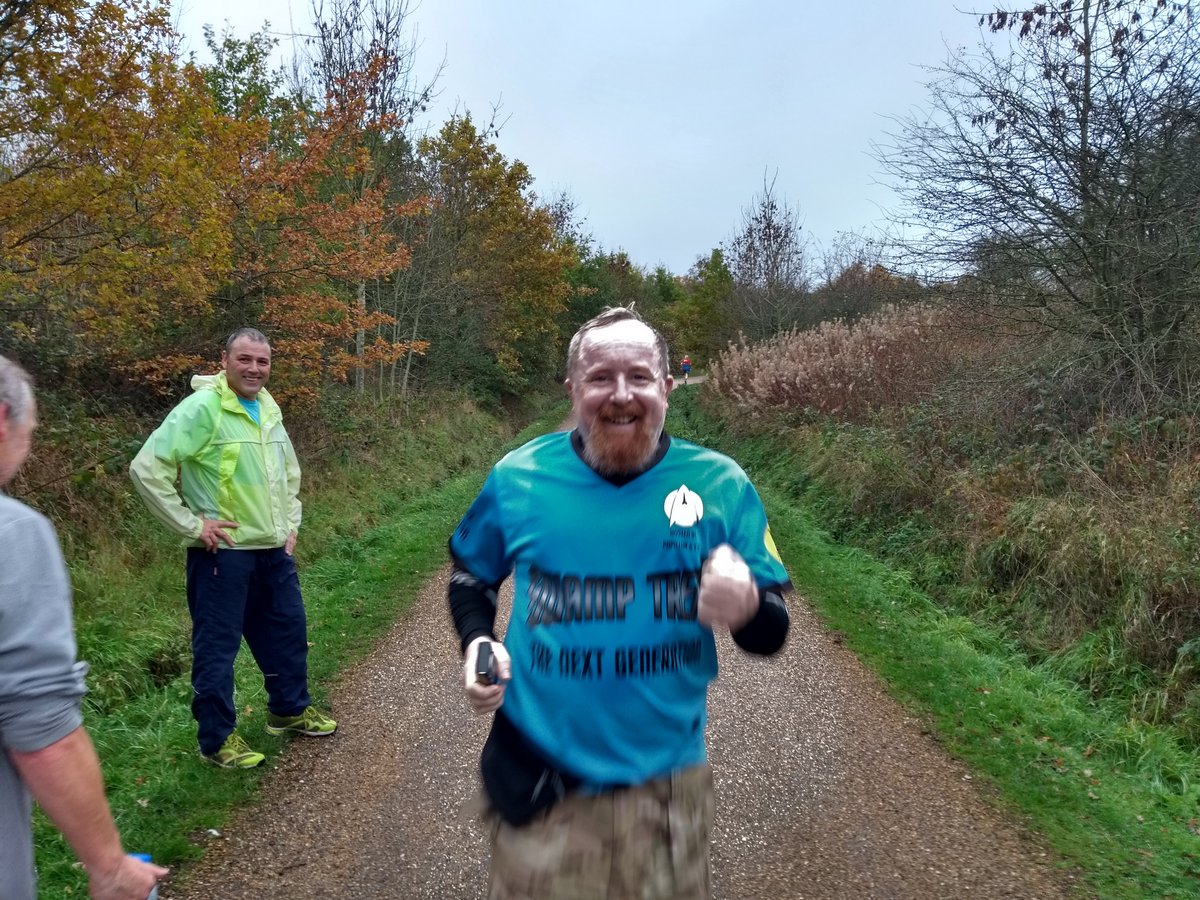 In places footing was tricky with greasy steps so care was needed when crossing stiles or going down into the railway paths. Paula’s day was made when we passed a field with several Shetland ponies. The FRB’s kept up a good pace on what was a runners trail. 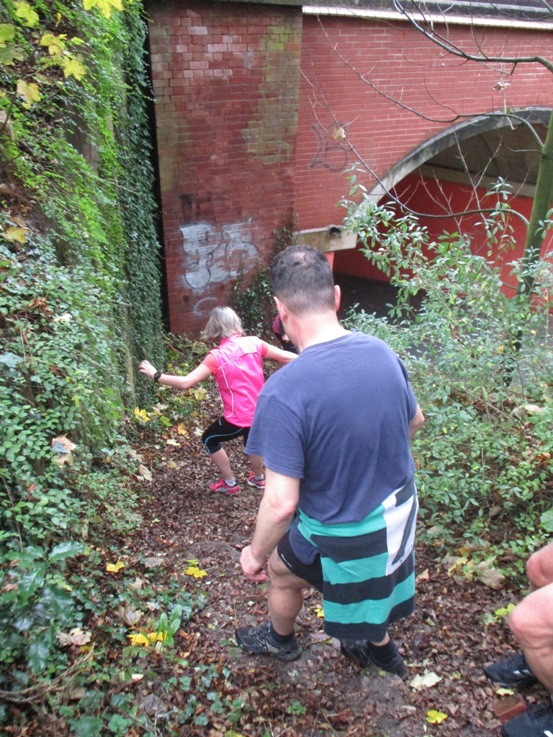 Returning to The Unicorn Hashers dried off, changed into clean dry clothes and drifted into the warmth of the pub. My choice for beer of the day was Wye Valley HPA always enjoyable.

Mr & Mrs Pink aka Adrian and Linsey made an entrance after missing the run to collect more sign-ups for the Hash Dickensian Christmas Extravaganza.  Of course the most notable thing was they had both arrived in full Morris Men outfits and with blacked up faces!

With everyone back in the pub and with drinks in hand our Joint Master Paula called the Circle. First she wanted to know – what did the pack think of today’s trail, too long, too wet, too many steps and too many horses etc?

A deserved Down Down for the Hare Simon R and it seems that he has been practicing as he did a creditable Down Down. Next Paula tried to give Adrian his birthday Down Down on making it to the big 60 on Saturday. Having said he wasn’t drinking, the Joint Master gave him half a Coke, this did not appeal and he tried to swap it, not happening on Paula’s watch! – Drink your Coke birthday boy!

The final pint was for Jackie and the Evil number 666! Having purchased her raffle ticket she didn’t place it on her glass as usual and foolishly stuck it on her forehead! Too late it was spotted and photographed by the Joint Master.

Now unfortunately Jackie nominated Fingerless who is not a top of the class as a – Pint Downer so most of it went down the front of his nice clean Vienna Euro Hash t-shirt!

Next the Circle was hijacked to make several announcements. First Jean had news about next year’s Ladies Nite, then Graham announced the date for the Christmas Pub Crawl (all details can be found on the web site) and finally Nigel J. had a suggestion for anyone looking to celebrate New Year’s Eve and handed round a flyer.

With the last Down Down drunk or worn, the Circle was handed over to Mary The Raffle Mistress to spread more joy to the masses and that lucky winner of the Toblerone, this week it was Jude.

Today it was the hare providing us with sausages, bread and chips – always appreciated on a damp morning like today.

Time was passing and Hashers began to drift off to do Sunday stuff, today it was a visit to The Tiddly and a pint or two of Old Rosie with friends of the Hash.

Next weeks Hares are Ian and Jean meeting at The Plough Pontesbury. Dont forget your Poppy it is Remembrance Sunday