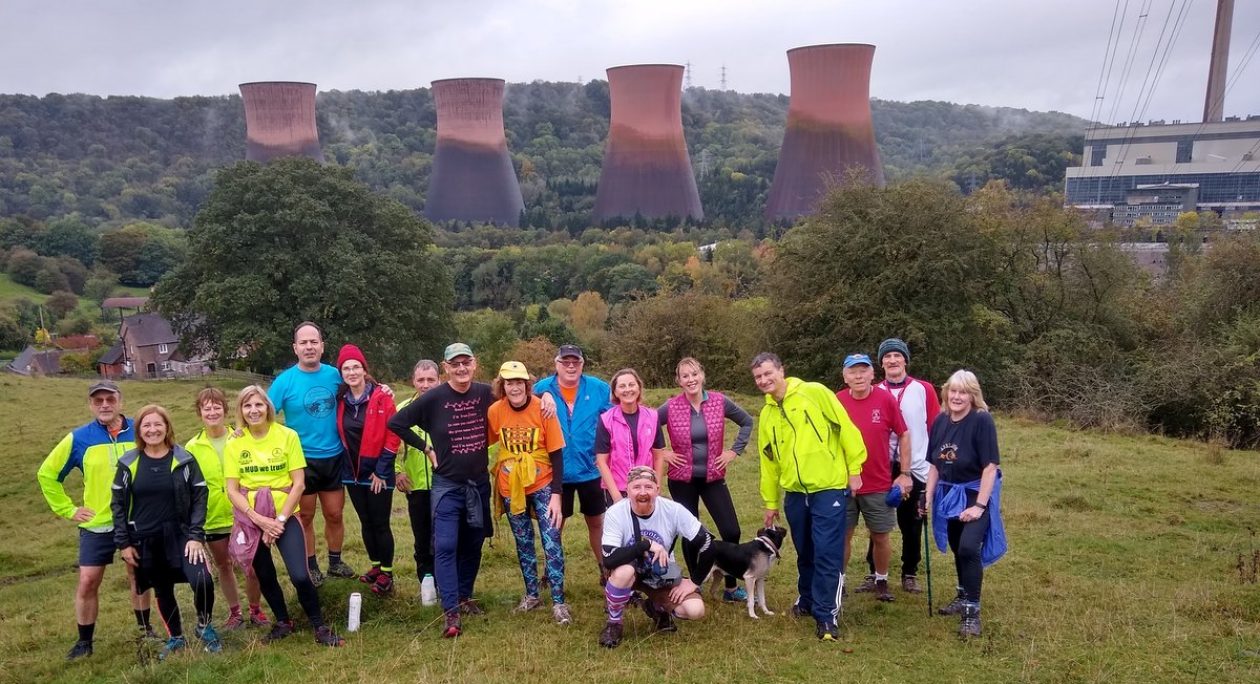 Today is a Hash Day, and it is a stormy morning to boot. This week the Pack were meeting just a little further along Ironbridge Gorge at Coalport .

A hardy crowd of Hashers turned up at the car park by The Shakespeare Inn, a regular and popular Hash pub & even though the Chirk 10k had been cancelled due to bad weather Gary & Lu from Shawbury Joggers still turned out to Hash this morning, you don’t have to be mad to be a Hasher but it helps!

It was also good to see that new owner of a plot of woodland, Mr Pink or Woody as I re-christened him was joining us today, always someone you can count on to help pad out a script.

The Pack gathered around Pablo to get the word, a very brief word the trail was laid in flour and it starts that way, and off he went as Pablo The trail followed a section of The Silkin Way to The Coalport Bridge where we crossed The Severn and headed toward the countryside and on the way passed a couple of stranded railway carriages, a crumbling WW2 pill box and a sewerage works, this part of the trail followed the bed of a dis-used railway line.

This eventually took the Pack out on to an open stretch of country which left us running into a blustery cross wind which beat on the Pack with hail.  We had a short piece of road work along quite a narrow busy road before turning into the entrance of Folly Farm, the owners having a sense of humour had a sign welcoming Lords, Ladies and Peasants too, not sure they have come across Hashers before otherwise they may have barred the entrance.

The loop was now closing as we crossed fields heading back toward Coalport, we had a re-group to see some friendly horses wrapped up against the cold, a few Hashers were also feeling the cold but not Action Man who living up to his Hash Handle ran in t-shirt & shorts.

The final stretch took The Pack down through Corbett’s Dingle and into shiggy heaven, lots of squelching oozy mud, the braver Hashers just ploughed straight through (Mr Pink tackled this stretch at speed and stayed vertical just, the video is impressive) while others skirted the worst of it trying to keep their shoes clean, some hope!

At last the river came back into view as the Pack swung past The Boat House pub and The War Memorial before crossing over the Jackfield & Coalport Memorial Footbridge.

In the shadow of The Hay Incline Plain and with his job done I joined Pablo and sat by the Old Canal for a paddle trying to get the worst of the mud off our shoes.

Now with sopping wet shoes we had only one flight of steps to climb and the On Home and the end of the trail.  After the usual post trail drying off and changing into a dry shirt I headed off to the bar.

As Paula was today’s Hare I stepped in to run the Circle.

We are generous bunch though and as everyone still enjoyed the trail so we gave the Hares their Down Down’s, so let’s give The Hares a note

‘Here’s to them they’re true blue……

The Hares had provided a gut busting amount of chips and bread for today’s Pack. We were also spoilt by Paula who had baked a very special chocolate cake; to everyone who couldn’t make it today I can confirm it was most excellent.

Yours truly was the first winner of the new prized Twin Peaks bar, I managed to make it last two days! Someone else would be revisiting their youth with a copy of Viz Annual anyone for a dose of TTFS?

Today the members of The Tea Party were Mary, Jim and Simon T., are we seeing the start of another splinter group? Not quite RSB’s Beer Hunters from PH3.

As the sun finally made an appearance the Pack began to thin and it was soon time to make a move and The Tiddly called so On On to next week.

Next week’s Hares are Pete T & Jenny. The Pack will meet on the car park of The Community Hall Bridgnorth there is a £ 1.10 fee. Apres  at The Black Horse Bridge Street.